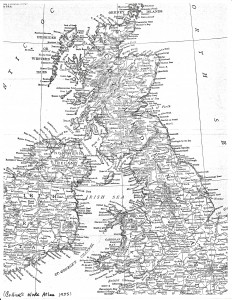 The 18th century is very difficult.  You track your ancestors back in time from the present, where you know them, to the point where the sources include persons not part of your memory. Your surnames appear in the Irish records; perhaps, even in the Scottish records.

But, there is an ocean and a sea between.  And a century or more of time–even if you know where they originate.  How to link what you know to what you are told must be correct–

Here is a strategy suggested by Kevin Whalen, Irish archivist and researcher in 1991, when he addressed the Federation of Genealogical Societies Conference in Ft Wayne IN:

You see, the eldest son (the heir) got the land and the title (if there was one).  The younger family members leased the land as farmers who tilled the land, or as cottars who lived on the land while practicing another occupation–blacksmith, surveyor, minister, schoolmaster.  Stated and documented origins of the family name provide the link to tie collateral branches together.

This map of the British Isles and the Irish Sea can be used for comparison of place names with earlier maps on this blog and in atlases and records of plats.  your favorite genealogist, Arlene Eakle   http://arleneeakle.com

PS  Stay tuned!  For the sources that provide these kinds of details.

Professional genealogist
View all posts by admin →
This entry was posted in Uncategorized and tagged Irish Sea. Bookmark the permalink.